For the first time in 6 years the Kempner Golf team is fielding a complete team at a District tournament.  After several years of low team numbers, a coaching change and uncertainty about the 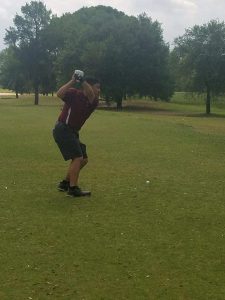 golf program at Kempner High School,  the team has experienced remarkable growth both in numbers and on the course.  At one point Kempner golf consisted of one Varsity Girl and 3 JV boys, however the hard work of both Coach Barrett and Coach Johnson to not only get players but also to help them develop to a level where they can compete at the varsity level Kempner has 8 students competing at the 20-6A district tournament at River Point April 2 and 3.

The boys team consisting of Ethan Euvazian, Aris Desa, Anthony Nguyen, Emilian Pastrana, and Jai Sehgal recorded a team total of 405 for the first round led by Ethan’s 78 which puts him in contention for a possible spot in the Regional Tournament.  Sam Capocyan played as an individual and carded a respectable 122 for his first round

The 2 Girls that are competing Catherine Weldon and Hanna Huerta carded scores of 115 and 135 on the windy and dry River Point Golf course on Monday.

Coach Johnson was very pleased with both the effort and the focus the players showed out on a course that was very dry, with difficult greens and a wind that was both high and constantly changing directions on the players as the round progressed.