The Kempner Cougar Golf team returned to River Point Golf Course on Tuesday for the second day of the District 20-6A Golf Tournament.    After a first round that had Ethan Eyvazian tied for 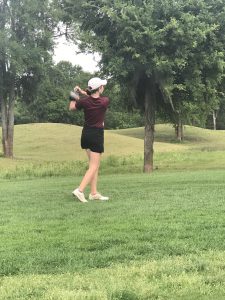 6th place in the Boys Tournament, and a full team participating for the first time in six years.  Day 2 brought a whole different set of conditions and results.  With  the winds continuing to blow again during the second day the greens became even more difficult to stop golf shots close  to the pin.  Of the eight golfers on the course for Kempner only half of them had ever played in a two day tournament, so there were several players who were learning what it took to compete at the Varsity level and above.  Despite all of this four of the eight golfers posted better scores on the second day of the tournament.  Anthony Nguyen took 9 shots off his first day score, Aris Desa dropped on stroke, Emiliano Pastrana took an incredible twenty two strokes off his first day score, and Catherine Weldon dropped 6 strokes from her day 1 round.

Coach Barrett, when asked about the results and the team in general shared the following thoughts. “I was glad to have a full boys team. The course conditions were tough and overall the scores were higher than normal for every school. Ethan was very competitive the first day, but wasn’t 100% on day 2. In a nutshell, we are going in the right direction with lower scores and more involvement.”

Both Girls that competed are sophomores and were looking forward to next year and working towards having a full team for next year.

The Golfers will take a couple of weeks off then start to prepare for the Summer golf season where they will participate in tournaments all over Houston and the South East Texas area.

Individual Medalist places were as follows: