The KHS cross country team’s season came to a close at the UIL Region III Championships, held at Kate Barr-Ross Park in Huntsville on October 22, but not before the squad faced their fellow Fort Bend ISD harriers at the District 20-6A tilt.

Brandon Phegley was the lone Cougar to advance to the second round of the post-season with a ninth-place finish at the district meet.  The sophomore sliced about 15 seconds off his  time from the 2017 district meet where, as a freshman he placed sixth.  This year his 16:58 clocking left him three spots behind his finish the previous year. 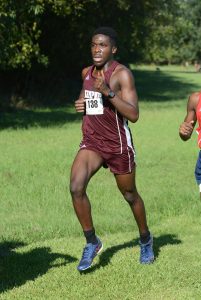 Senior Francis Ogbonna (pictured, left) was the only other Coug in the top 50 as his 18:12 time was good for 37th spot.  The varsity boys team finished eighth in the team scoring.

Alexa Argueta, in only her first year running cross country, was the top scorer for the varsity girls team as her 21:11 clocking slotted her into fourteenth position.  Iman Ahmed’s 23:13 placed her 25th, while Mariela Hernandez was the third Cougar across the line in 24:26 (31st).  The girls finished in sixth place overall.

The top three teams and the top 10 individuals in the varsity division at each district meet qualify for regionals.

The highlight of the meet, though, was the strong effort put in by the junior varsity girls, where they placed all five of their scoring runners within the top twelve finishers.  The group tallied 34 points, placing them second – only seven points away from a district title.  Zoya Alvi led the way for the Cougs, with a 14:25 effort over the two-mile distance to place third.  Sofia Siddiqui was two spots behind in 14:33, while the trio of Minh Nguyen (15:01), Kayla Nguyen (15:03), and Kate Nguyen (15:25) cross the finish in tenth, eleventh, and twelfth.

Martin Bagadion was the top KHS runner in the junior varsity boys race, finishing in 22:10.

Phegley donned the maroon and white KHS kit one final time in the 2018 season in Huntsville.  Slowed by a lung infection that kept him out of school for a week prior to the regional meet (and also challenged him at the district championships), he still managed to improve his personal record on the regional course by nearly a minute with an 18:41 clocking.  He will race once more this season, running in the Rising Stars race at the Nike Cross Regionals on November 18 in The Woodlands, where he’ll face some of the top harriers from all across Texas and the surrounding states. 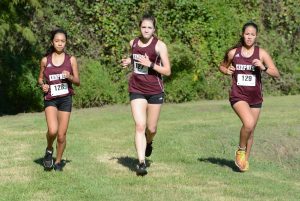 Looking towards the 2019 XC season, the boys team will need to reload behind Phegley.  The varsity team, due to graduation, will have plenty of opportunities for runners looking to step up and tackle the challenge.

Outlook for the girls team, however, is much brighter.  Argueta will look to take the next step and qualify for her first regional meet and she should have plenty of company.  Five of the six members of the varsity team will return along with the entire district runner-up junior varsity squad – giving Coach Pierce and Coach Gonzalez plenty of depth on the girls’ side.