The winter sports seasons are upon us and with Basketball, Soccer and Swimming taking up the Kempner Sports Calendar I felt it was a good time to start with some winter sports primers.  These articles as I can produce them will start with the fundamentals of the sport including basic terms and as many images as I can find, to help clarify things.

The first part of the series will cover the court itself and some things that as parents/fans you can look for.  The length and width of the court is set based upon the level of competition as the table below show.

Beyond that every court will have the following lines and markings 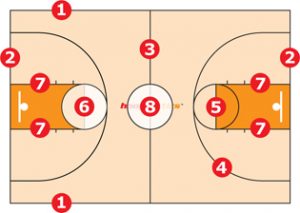 So a brief description of each marking

In the next article we will take a look at the court in greater detail and then move on to things like offensive and defensive strategies and player positions.