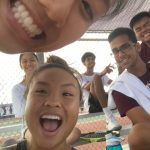 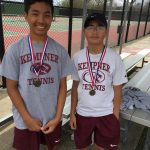 Ishan Danayak got 3rd place! Michelle Dinh medaled at the Alief tournament! Andrew Nguyen and Kevin Doan won the Boys doubles at Clear Springs Photos of everyone and their medals are in the Tennis Gallery

Singles waiting for a match at the Katy tournament

Congrats to the Cougar Team Tennis squad.  They have advanced to the Bi-District playoffs. They played Seven Lakes this afternoon with the winner advancing to the Area playoffs.

Now we get to Coach Andrus who is both Head Football coach as well as Athletic Director for KHS.   He shares the top 6 accomplishments for KHS sports   Football goes to the play-offs after beating Hightower for the first time in years Baseball and Softball return to the play-offs Girls soccer goes to